These comments are from the group of around 10 artists who attended the open studio on the last day of the residency. I was allowed to keep the work in the space for a while after the residency and  there were also 4 other individual artists who came to the studio over the following week.   It was mentioned that the work showed a methodology rather than a finished piece, and that it could be repeated in future in different spaces.  Others were intrigued by how the paintings would look displayed on their own, once the residency had finished.  I will try this despite my feeling that the paintings are a part of the whole piece and are, in a way, site-specific. My doubts about  the quality of the paintings were allayed by positive responses from the painters in the group.   There was a general feeling that this residency has opened up a more fluid way of working for me, and I was pleased that I had used the residency as I had hoped: to move forward rather than re-making work from my past.  In spite of this one artist felt that the transition from one medium to another, as well as the importance of the camera viewpoint, echoed some of my earlier work. The element of time in the work had not been fully explored, although it was implicit, and it was suggested that it might be possible to make the work during the time when the surveillance camera would revert to its night-time mode.   The only problem would be light to paint by!   One photographer friend understood the work immediately and that I had subverted the supposed `catching of reality` implied by surveillance equipment.   He also felt that there was a kind of madness in me sitting at the small table painting in such a large space.  I did enjoy the absurdity of  the situation.   It was suggested that because the process rather that the paintings  was  the main point of the residency, the studio- like set up of the table itself was the key part of it.   Each painting in process could have been photographed on the table with its attendant monitor image.  This would have led to a photographic series of works.  Perhaps something to  explore in future.  All together I found this residency a positive experience and I was fortunate in having no brief, but developing my own.

I`m enjoying the process of painting more now: amongst the clumsiness and frustration are moments where I get thorougly involved in what I am doing, so that time passes quickly. I am also positioning the camera so that the image is composed more aeshetically. Interesting to note that the image loses its pinkish bluish hue on the monitor when the camera is positioned where the daylight is lowest.  I suspect that the camera, because it is 24 hour surveillance, reverts to black and white in low light conditions. Nearing the end of the residency I am mindful of  how to present the work to the audience, and am playing with attaching the paintings on the same pillar the camera was positioned near.  This would mean two images per pillar, corresponding to the two camera directions (gaffer tape is stuck to the floor to signify where the step ladder legs have been).   I stuck the paintings up as I progressed through the space, which led to them appearing as blurry ovals in the paintings which followed. This seemed too confusing visually so finally I decided to put each painting on the pillar depicted in that particular image.   In the last days of the residency I am aware of feeling more relaxed and mixing less white gouache in with the watercolour paint.  My penultimate painting shows more dexterity or at least familiarity with the way that I can achieve the blurring I initially aimed for a couple of weeks ago.   For my closing reception, in order to give a sense of the ongoing   nature of project, the painting table and monitor are left with an unfinished painting display 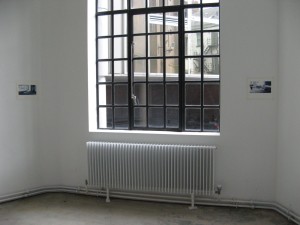 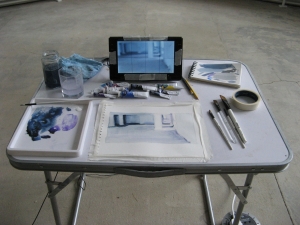 I decided to paint images of the space as they

appeared on the monitor, from the camera

positioned at various points near the columns.

Helen found me a small table on which I could

the large windows.  I knew this would be a

challenge as I had last painted in watercolour

when I was around 12 years old!   I remember

enjoying it:  I used to copy reproductions of

My doubts set in as I found my first attempts

faltering and underconfident.   How could I justify

exhibiting these experiments.  I decided that this

learning process would become part of the work,

and I would show it, warts and all.  The residency

after all was all about my response to the space,

so the time spent here would allow the work its own

momentum.  Painting as a performative

would only be shown in this context: they would

make no sense taken away and displayed

Considerations of scale emerged when I initially

started with the paintings the same size as the

monitor 8ins x 4ins.   I found this too fiddly, and

larger would push them too far away from the

scale of  the monitor

and would give the impression that I was

foregrounding a sense of a more `stand alone`

kind of painting.   For me, each element in the

space, the camera on the stepladder, the table with

the monitor, and the paintings needed to be seen

as of equal importance.

Another challenge for the painting process was

my decision to keep the camera slightly out of

focus.   I wanted the space to be recognizable, but

to subvert the surveillance aspect.  I wanted to

move the image away from a kind of clear

shapes of which I only had a vague idea of their

origin – a small smudge of red was supplied by part

of a car seen through one of the small windows.

Because of my inability to create a dexterous

technique gained by those who have been using

this medium for year, I found myself painting

in an oddly contradictory way: resulting in

slightly hard edged images gleaned from out of

focus ones.   This is a frustrating process, but as

time goes on I feel more confident in how 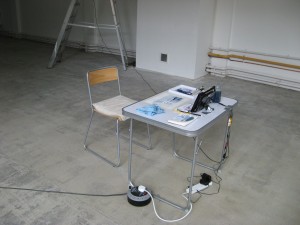 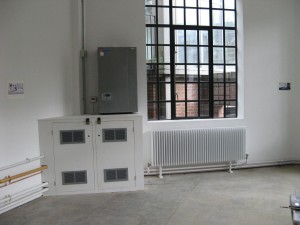 Connecting  up the surveillance camera and monitor took some time: the only electricity socket turned out to be outside the space in the corridor by the toilet: many extension leads were needed to get things working. The camera was on the floor by my feet and the monitor on my lap.   At last an image, but one I could not make sense of.  What I was seeing was a lop- sided, fuzzy image image from underneath my chair.  The unexpected colours of the white space turned out to be a soft pink/blue/purple as picked up by the camera and monitor!   What appealed to me was that  surveillance equipment could provide such an ambiguous  looking image. Here was my starting point – Iwould represent  the space as seen on  the monitor from positions normally occupied by surveillance cameras. The main problem with this was getting the camera high enough without fixing it with brackets to the pillars, and I did not want to buy enough cameras to fill the space sufficiently.   An answer came with the borrowing of a high step ladder on which I gaffer taped the camera.  I could move the ladder around to get the kind of angles and directions I could use. I decided that my medium should be water colour. 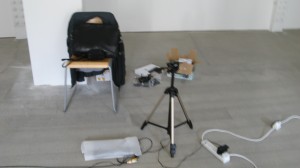 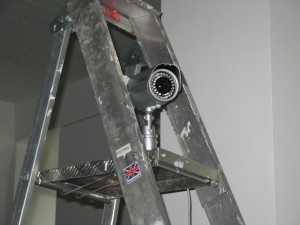 Initially the space is intimidating – it`s vast!  The first thing I do is a drawing of the space , one at each end.  The next day I take many photos. Helen took one of me on the first day sitting on a chair at the end with the big windows: this image says it all: my human scale is dwarfed in the space. My first impression, because of the many pillars is that of an underground car park. My initial proposal for this residency was based on works I had done in the early 1980s: I was fascinated by anamorphosis (stretched images, like the skull in Holbein`s `The Ambassadors`).   I connected these  images to beams of frozen  projected light.  The images which I drew on walls could only make sense from a single viewpoint and these works ended up as photographs: the single `eye` of the camera aided the flattening of space which `made sense` of the image. In the space at Wards my proposal was to paint on the pillars and walls and mount a live feed surveillance camera with a monitor showing the flattened image. Given the length of time and the size of the space I decided to leave the painting, which would have to be painted over after the residency, but it seemed appropriate to use a surveillance camera. My proposal after all was a starting point which I knew would develop differently once I spent time in the actual space.  I then bought a surveillance camera and a small monitor to play with. 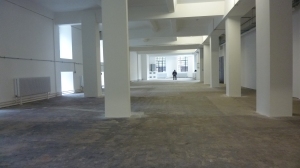 ‘My recent PhD is titled Backwards into the Future: an exploration into revisiting, re-presenting and rewriting art of the late 1960s and early 1970s. This exploration grew out of being requested to remake work I created originally during this  time. For example for  Live in Your Head: Concept and Experiment in Britain 1965-75  Whitechapel Art Gallery 2000 I re-configured a film installation originally made for The New Art, Hayward Gallery 1972. At Tate Modern in 2009 as part of the Expanded Cinema: activating the space of reception conference I showed a re-presented film `performance` of a work originally made and shown at a weekend film festival at the ICA in 1976. These exhibitions above show that my past installations may also exist in the present by being re-made or re-presented time and again through various manifestations’.

During the 1980s Dye experimented with drawing and its relation to the video or still camera: a relation between traditional media and technology, and these works were only occasionally shown publicly, but they still remain as documentation and plans which can be installed as the occasion arises.

‘This huge 1st floor space has a cave-like or underground car park quality and I shall be using surveillance cameras and monitors to give different viewpoints  on stretched drawings on the walls.  This work will be developed as I work in the space during the residency`